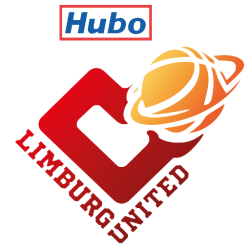 Limburg United, for sponsorship reasons named Hubo Limburg United, is a professional basketball club based in Hasselt, Limburg, Belgium. Founded in 2014, the club plays in the Pro Basketball League (PBL), the first tier of basketball in Belgium.
Around the beginning of 2014 Limburg United was founded in the city of Hasselt. The name expressing the founders' motivation for there to be a top tier basketball team from Limburg province in the aftermath of Bree B.B.C. relegating from BLB Division I in 2008 and eventually disbanding. Limburg United asked for a B-licence for the 2014–15 Basketball League Belgium, and eventually got it. Former Antwerp Giants assistant Brian Lynch signed a 5-year contract to become United's head coach. The long-term goal of the club was expressed to "become a club in the subtop of Belgium in 3 or 5 years." In the 2016–17 season, Limburg reached the Final of the Belgian Basketball Cup but lost to Telenet Oostende.

The Sporthal Alverberg is a sports hall located in Hasselt , in Belgian Limburg , where two professional sports teams, the Hubo Initia Hasselt Handball Club, and the Limburg United Basketball Club play .
The Sporthal Alverberg has a capacity of 1730 seats. It has 8 cloakrooms and has three basketball courts , 2 handball and futsal courts and 6 volleyball and badminton courts .