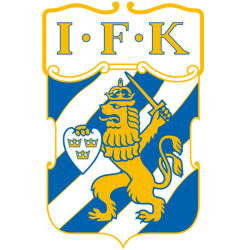 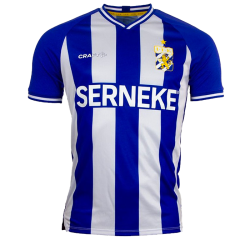 Idrottsföreningen Kamraterna Göteborg (officially IFK Göteborg Fotboll), commonly known as IFK Göteborg, IFK (especially locally) or simply Göteborg, is a Swedish professional football club based in Gothenburg. Founded in 1904, it is the only club in the Nordic countries that has won one of the main UEFA competitions, having won the UEFA Cup in both 1982 and 1987. IFK is affiliated with Göteborgs Fotbollförbund and play their home games at Gamla Ullevi. The club colours are blue and white, colours shared both with the sports society which the club originated from, Idrottsföreningen Kamraterna, and with the coat of arms of the city of Gothenburg.

Besides the two UEFA Cup titles, IFK have won 18 Swedish championship titles, second most in Swedish football after Malmö FF, and have the third most national cup titles with seven. The team has qualified for four group stages of the UEFA Champions League, and reached the semi-finals of the 1985–86 European Cup. IFK Göteborg is the only club team in any sport to have won the Radiosportens Jerringpris, an award for best Swedish sports performance of the year voted by the Swedish people, for the 1982 UEFA Cup victory. IFK is the most popular football club in Sweden, with diverse country-wide support.

IFK Göteborg play in the highest Swedish league, Allsvenskan, where they have played for the majority of their history. They have played in the Swedish first tier continuously since 1977, which is the longest ongoing top-flight tenure in Sweden. The club won its first Swedish championship in 1908, four years after the founding, and has won at least one championship title in every decade since, except the 1920s, 1970s and 2010s. IFK Göteborg's most successful period was from 1982 to 1996, when the team prospered in European football and won 10 out of 15 Swedish championships.

Gamla Ullevi is a football stadium in Gothenburg, Sweden, that opened on 5 April 2009. The stadium replaced the city's previous main football stadium, also called Gamla Ullevi, and is the home ground of GAIS, IFK Göteborg and Örgryte IS. It is also the national stadium for the Sweden women's national football team. The new stadium was built on the ground of the now-demolished old stadium. The construction of the stadium was surrounded by controversy, regarding the cost of the project, the alleged low standard of the finished stadium, as well as its name.

The first competitive match at the stadium on 5 April 2009 was also a derby between Örgryte IS and GAIS, attracting 17,531 spectators. The current attendance record of 18,276 was, however, set about a week later when IFK Göteborg played their first game at Gamla Ullevi against Djurgårdens IF.