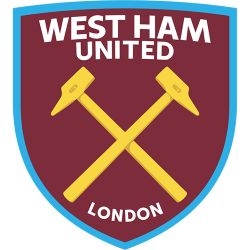 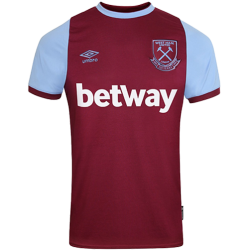 West Ham United Football Club is an English professional football club based in Upton Park, East London, England currently playing in the Premier League, England's top tier of football. The club was founded in 1895 as Thames Ironworks and reformed in 1900 as West Ham United. In 1904 the club relocated to their current Boleyn Ground stadium. They initially competed in the Southern League and Western League before eventually joining the full Football League in 1919 and subsequently enjoyed promotion to the top flight for the 1923 season. 1923 also saw the club feature in the first FA Cup Final to be held at Wembley against Bolton Wanderers.

In 1940 the team won the inaugural Football League War Cup. The club has won the FA Cup three times: in 1964, 1975 and 1980 as well as being runners-up twice, in 1923 and 2006. In 1965, they won the European Cup Winners Cup, and in 1999 they won the Intertoto Cup. They are one of eight existent clubs never to have fallen below the second tier of English football, spending 55 of 87 league seasons in Division 1 to 2013. However, unlike the other seven (Arsenal, Chelsea, Everton, Liverpool, Manchester United, Newcastle United and Tottenham Hotspur), the club has never won the league title. The club's best final league position is third place in the 1985–86 First Division. London Stadium (formerly and also known as Olympic Stadium and The Stadium at Queen Elizabeth Olympic Park) is a multi-purpose outdoor stadium at Queen Elizabeth Olympic Park in the Stratford district of London. It is located in the Lower Lea Valley, 6 miles (10 km) east of central London. It was originally constructed for the 2012 Summer Olympics and 2012 Summer Paralympics—serving as the track and field venue, and as the site of their opening and closing ceremonies. Following the Games, the stadium was subsequently renovated as a multi-purpose stadium, with its primary tenant becoming West Ham United F.C.

Land preparation for the stadium began in mid-2007, with the official construction start date on 22 May 2008. The stadium held its first public event in March 2012, serving as the finish line for a celebrity run organised by the National Lottery. Holding 80,000 for the Olympics and the Paralympics, the stadium re-opened in July 2016 with a capacity of 60,000. The decision to make West Ham United the main tenants was controversial, with the initial tenancy process having to be rerun.

The stadium hosted several 2015 Rugby World Cup matches, two England rugby league Test matches, and the 2017 IAAF World Championships in Athletics and 2017 World Para Athletics Championships (the first time both events had been held in the same location in the same year). The stadium can also hold concerts with up to 80,000 spectators, and, due to its oval shape and relocatable seating, was deemed to potentially be suitable for other sporting events such as baseball and cricket.