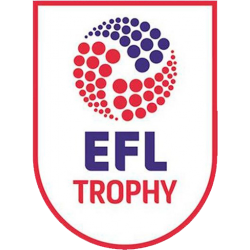 The EFL Trophy (English Football League Trophy) is an annual English association football knockout competition open to the 48 clubs in EFL League One and EFL League Two, the third and fourth tiers of the English football league system and, since the 2016–17 season, 16 under-21 sides from Premier League and EFL Championship clubs. It is the third most prestigious knockout trophy in English football after the FA Cup and EFL Cup.

It began in the 1983–84 season as the Associate Members' Cup, but in 1992, after the lower-division clubs became full members of the Football League, it was renamed the Football League Trophy. The competition replaced the short-lived Football League Group Cup. It was renamed again in 2016, as the EFL Trophy. The competition has been associated with a title sponsor since its second season: currently, it is known as the Leasing.com Trophy, having previously been the Checkatrade Trophy.

The first draws are made in August, then the competition runs as 16 regional groups, each containing four teams. The top two from each group qualify for the knockout stages before the two winners meet in late March or early April in the final at England's national stadium, Wembley. The basic north/south format of the competition has existed since its beginnings, with some Midlands clubs fluctuating between the north and south draws each season. Other details have varied over the years, including in some years inviting clubs from the semi-professional Conference Premier, and holding a round-robin group stage prior to moving into knockout rounds.