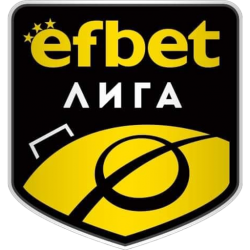 The First Professional Football League (Bulgarian: Първа професионална футболна лига), also known as the Bulgarian First League or Parva liga, currently known as the efbet League for sponsorship reasons, is a professional association football league, located at the top of the Bulgarian football league system. Contested by 14 teams, it operates on a system of promotion and relegation with the Vtora liga.

The Bulgarian football championship was inaugurated in 1924 as the Bulgarian State Football Championship and has been played in a league format since 1948, when the A Group was established. The champions of the First League have the right to participate in the qualifying rounds of the UEFA Champions League based on the league's European coefficient. Additionally, two UEFA Europa League spots are allocated to the second team in the final standings and the winner of the European playoffs. A further fourth spot may also be granted to the fourth placed team in the final league ranking, given that the Bulgarian Cup holder has finished among the top three teams at the end of the season.

A total of 67 clubs have competed in the Bulgarian top-tier since its establishment. In the last decade, many teams such as the current champions Ludogorets were introduced for the first time in the league. In 2016–17, Vereya Stara Zagora became the 67th club to participate in the competition. Since 1948, eleven different teams have been crowned champions of Bulgaria. The three most successful clubs are CSKA Sofia with 31 titles, Levski Sofia with 26 titles and Ludogorets Razgrad with 8 titles respectively. The current champions Ludogorets Razgrad won their eight consecutive title in their eight First League season in 2018–19.