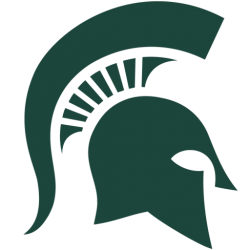 The Michigan State Spartans men's basketball team represents Michigan State University (MSU) and competes in the Big Ten Conference of NCAA Division I College basketball. Their home games are played at the Breslin Student Events Center. Tom Izzo has been the head coach since 1995. The Spartans have won two NCAA championships and 16 Big Ten Conference Championships.
Their two National Championships came in the 1979 NCAA Tournament and the 2000 NCAA Tournament. The 1979 National Championship Game was the most watched college basketball game in history, with 35.11 million television viewers.

The Jack Breslin Student Events Center is a multi-purpose arena at Michigan State University in East Lansing, Michigan. The arena opened in 1989, and is named for Jack Breslin, MSU alumnus, former athlete and administrator, who first began pushing for the arena in 1969. It is home to the Michigan State Spartans men's and women's basketball teams. Although it nominally contains 16,280 seats, the arena typically holds around 10,000 for most events depending on the floor or stage setup. The Breslin Center superseded Jenison Fieldhouse, which stands approximately 400 feet to the northwest, which had served since 1939.