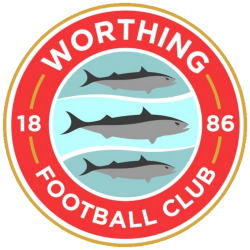 The club was formed as Worthing Association Football Club (a name that lasted until 1899) in February 1886 and played friendlies and Sussex Senior Cup ties for the first few years of their existence.

In 1896 the club became founding members of the West Sussex Football League, joining the Senior Division. During their time in the West Sussex league they were league champions on seven occasions. In May 1900 the club absorbed local rivals Worthing Athletic and a year later moved to its current home, then known as the Sports Ground, now as Woodside Road. In 1905 another rival team, Worthing Rovers, was also absorbed.

The club's intriguing nickname of "The Rebels" dates from when it resigned from the West Sussex League on a point of principle over a rule change, prior to becoming a founder member of the Sussex County League in 1920. Worthing are also known as "The Mackerel Men", a reference to the three fish on the club crest.

In 1920 Worthing became founder members of the Sussex County League, where once again they won eight league titles, in fact in the twenty seasons prior to World War II they only finished outside the top four on two occasions.

After managing a return to the top division, Worthing joined the Isthmian League in 1977, initially in Division Two, but by 1983 they had reached the Premier Division under manager Barry Lloyd and in fact finished as runners-up in 1983–84 and 1984–85. After Lloyd's departure to Brighton & Hove Albion, however, the club soon slipped back down to Division Two, finishing bottom of Division One in the 1990–91 season with only 10 points and having conceded a huge 157 goals.

Former Northern Ireland international Gerry Armstrong was appointed manager in 1991 and in 1992–93 led the club to promotion back to Division One, which was followed two years later by a return to the Premier Division under John Robson, although Worthing finished bottom in their first season back in the Premier Division and were to remain in Division One until 2004 when the re-organisation of the English football league system saw them moved back to the Premier Division. They were relegated at the end of the 2006–07 season.

The club then reached the play-offs under manager Alan Pook two seasons in a row, losing both matches without scoring a goal. Unknown young manager, Simon Colbran then took the helm and soon became a fans' favourite as the Rebels topped the league for much of Autumn and Winter. Despite several budget cuts, the Rebels finished third and narrowly missed out in the play offs at home to Godalming.

Former Brighton & Hove Albion player Adam Hinshelwood was appointed Worthing manager in December 2013 and lost his first game away at Burgess Hill 4–1. In January 2015 the playing budget at the club was completely cut and its debts revealed to be around £200,000. The future of the club looked in serious doubt until March 2015 when local football enthusiast George Dowell became the majority shareholder in the club with plans to invest in various areas. On 10 June 2015, Hinshelwood resigned from the club to take up a full-time coaching post at Brighton & Hove Albion. He was replaced by assistant manager Jon Meeney and 29-year-old defender Gary Elphick.

In 2016, Worthing were promoted to the Isthmian League Premier Division via the play-off, having finished the 2015-16 season in third place in the southern division. Player-manager Gary Elphick was on the scoresheet in the play-off final. In late 2017, Adam Hinshelwood returned to the club as first team manager.

A sports ground opened on the Woodside Road site as early as 1892 when the site was part of the parish of West Tarring, which at the time was not yet part of the borough of Worthing. Known as the Pavilion Road Sports Ground, it occupied a 13-acre site, with a Queen Anne style pavilion giving its name to Pavilion Road along the south of the site. Worthing FC moved to the ground in 1903. In 1937 the Sports Ground closed and it is the site's northern portion which developed into the existing stadium. The southern portion of the Sports Ground became tennis courts and then in 1948 became home to Worthing Pavilion Bowls Club. Floodlights were installed in 1977. At the end of 1984–85 Woodside Road's main stand burnt down.

The ground has also been home to Horsham (during the 2008–09 season) and Brighton & Hove Albion's reserve team after the closure of the Goldstone Ground in 1997.

June 2015 saw an artificial 3G pitch installed to replace the turf surface, among a number of substantial improvements around the ground.