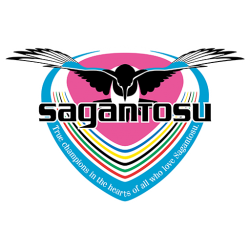 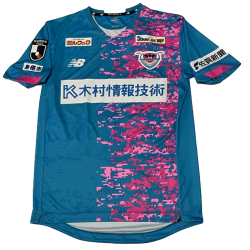 Sagan is a coined word with a couple of meanings behind it. One of its homophones is sandstone (砂岩, sagan) in Japanese. This symbolises many small elements uniting to form one formidable object, for example as a metaphor for a team. Also, Sagan Tosu can be interpreted as "Tosu of Saga (Prefecture)" (佐賀ん鳥栖, Saga-n Tosu) in the area's dialect. In addition, it is widely believed that the word is meant to be a pun with Italian giants Juventus although the club hasn't confirmed it. Ekimae Real Estate Stadium (駅前不動産スタジアム, Ekimae Fudōsan Sutajiamu) is a football stadium in Tosu, Saga, Japan. It serves as a home ground of J1 League club Sagan Tosu. The stadium holds 24,130 people and was built in 1996.

It was built in the site of Tosu rail yard and Tosu classification yard in accord with the JR Kyushu's Tosu Station.