The Chennai Super Kings (abbreviated as CSK) are a franchise cricket team based in Chennai, Tamil Nadu, that played in the Indian Premier League (IPL). Founded in 2008, the team played its home matches at the M. A. Chidambaram Stadium in Chennai. On 14 July 2015, the Supreme Court appointed RM Lodha committee suspended the Super Kings from the IPL for a period of two years for the alleged involvement of their owners in the 2013 Indian Premier League betting case. Prior to the suspension, the team was captained by Mahendra Singh Dhoni and coached by Stephen Fleming.

The Super Kings were the most successful team in the IPL with a win percentage of 60.68 and had won the title twice in succession (2010 and 2011). In 2010, they won the Champions League Twenty20 for the first time and repeated the feat in 2014. The leading run-scorer of the team is Suresh Raina, while the leading wicket-taker is Ravichandran Ashwin. The brand value of the Super Kings in 2015 was estimated at $67 million, making them the third most valuable franchise in the IPL.

In September 2007, the Board of Control for Cricket in India (BCCI) announced the establishment of the Indian Premier League, a Twenty20 competition to be started in 2008. In January 2008, the BCCI unveiled the owners of eight city-based franchises. The Chennai franchise was sold to the India Cements for $91 million, making it the fourth most expensive team in the league behind Mumbai, Bangalore and Hyderabad. India Cements acquired the rights to the franchise for 10 years. Former ICC Chairman N. Srinivasan was the de facto owner of the Chennai Super Kings, by means of his position as the vice-chairman and managing director of India Cements Ltd. The franchisee was transferred to a separate entity named Chennai Super Kings Cricket Ltd., after the Supreme Court of India struck down the controversial amendment to the BCCI constitution's clause 6.2.4 that allowed board officials to have a commercial interest in the IPL and the Champions League T20 on January 22, 2015.

The Chennai Super Kings have active rivalries with the Mumbai Indians and the Royal Challengers Bangalore. The Super Kings and Mumbai Indians have played against each other more number of times than any other two teams in the IPL. They are the two most successful IPL teams and often termed as "big spenders" at the players auction. The two sides have met each other at the final of the IPL thrice, with Mumbai winning two of them and Chennai managing one victory.

The Economic Times commissioned UK-based Brand Finance to carry out brand evaluation of the IPL and also each of the eight franchise teams (that was increased to 10 in 2011). Chennai Super Kings was rated as the "most valuable team" in the Indian Premier League in 2010–11, with a brand value of $100 million (app ₹ 2.24 billion). In February 2013, London based Brand Finance evaluated the top 150 most valuable teams in the world, in which Chennai Super Kings is placed in the 147th place valued at $46 million just behind the Mumbai Indians. The home ground of the Super Kings is the historic M. A. Chidambaram Stadium (commonly called "The Chepauk") located in Chennai. The stadium is named after former BCCI President M. A. Chidambaram. It is the oldest stadium in India which is in continuous use. The stadium is owned by the Tamil Nadu Cricket Association and has a seating capacity of 50,000 as of May 2013. In 2010, the stadium underwent a major renovation for hosting some of the matches of the 2011 ICC Cricket World Cup. The seating capacity was increased from 36,000 to 50,000 and three new stands were established during this renovation.

In 2014, Chennai Super Kings played all their home matches at Ranchi due to issues with Government of Tamil Nadu. 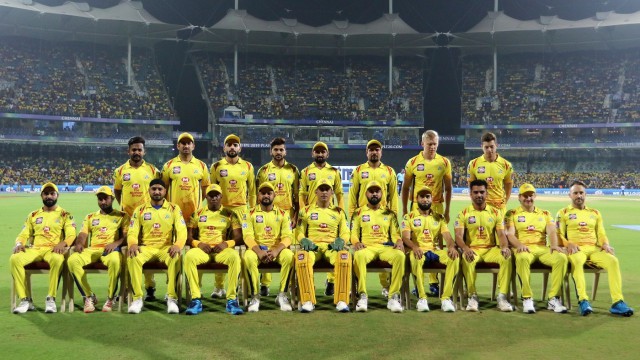