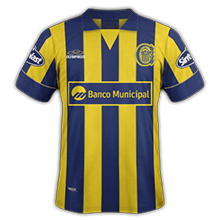 Club Atlético Rosario Central (Spanish pronunciation: ) is a sports club based in Rosario, Argentina, that plays in the Argentine Primera División. The club was officially founded December 24, 1889 by a group of railway workers, taking its name from the British-owned Central Argentine Railway company. One of the oldest Argentine teams, it is considered a pioneer in its hometown and the only one of current Rosarian teams to have won an international title organised by CONMEBOL and recognised by FIFA: the Copa Conmebol, won by the club in 1995.

Originally member of the Rosario's Football Association, the club affiliated to the Argentine Football Association (AFA) in 1939. Since then, Rosario Central has won the Argentine's First Division four times; its last domestic title was the 1986–87 season. In addition, Rosario Central won the Conmebol Cup (the precursor of the current Copa Sudamericana) once, in 1995, being the only team in Santa Fe province which has won an official international title recognised by FIFA.

In 2012, the club was considered by FIFA as one of the 11 most classical clubs in Argentine football.

Rosario Central has a strong rivalry with Newell's Old Boys. The matches played between them are named "El Clasico Rosarino", and is amongst the most heated rivalries in Argentina due to both teams and due to Rosario Central's local popularity. Rosario Central's home stadium is Estadio Dr. Lisandro de la Torre, known simply as "El Gigante de Arroyito" (The Giant of Arroyito), is the largest stadium in the city.