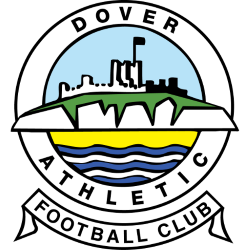 Dover Athletic Football Club is an association football club based in the town of Dover, Kent, England. The club currently competes in the National League, the fifth tier of English football. The club was formed in 1983 after the dissolution of the town's previous club, Dover F.C., whose place in the Southern League was taken by the new club. In the 1989–90 season Dover Athletic won the Southern League championship, but failed to gain promotion to the Football Conference as the club's ground did not meet the required standard. Three seasons later the team won the title again and this time gained promotion to the Conference, where they spent nine seasons before being relegated at the end of the 2001–02 season. The club was transferred from the Southern League to the Isthmian League in 2004, competing in that league's Premier Division for one season before mounting financial problems led the club to a further relegation. In the 2007–08 season, Dover won Division One South of the league, before winning the Premier Division in 2008–09 and thus gaining promotion to the Conference South. They spent five seasons in this division, reaching the play-offs three times, before defeating Ebbsfleet United in the 2013–14 play-off final to finally return to the Conference Premier after a twelve-year absence.

The team usually wear white shirts and are consequently nicknamed the Whites. They have played at the Crabble Athletic Ground since the club's formation. The club's best performance in the FA Cup was reaching the third round proper in both the 2010–11 and 2014–15 seasons, while the best performance registered in the FA Trophy, the national competition for higher-level non-league clubs, was a run to the semi-finals in the 1997–98 season.