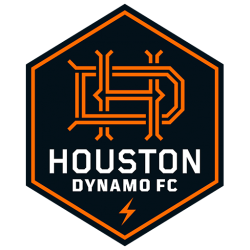 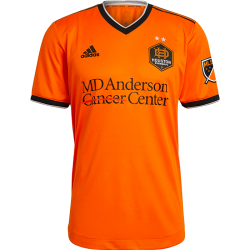 Houston Dynamo are an American professional soccer club based in Houston, Texas. The franchise competes in Major League Soccer (MLS), as a member of the Western Conference. The Dynamo had first played their home games at Robertson Stadium on the University of Houston campus until 2011. Since 2012, the Dynamo has played home matches at BBVA Compass Stadium, a soccer-specific stadium located in Houston. The team's head coach is Wilmer Cabrera.
The Dynamo was established on December 15, 2005 when the then owner of the San Jose Earthquakes, Anschutz Entertainment Group, announced that the team was relocating to Houston after failed attempts in securing a soccer-specific stadium in San Jose, California. The club would then be an expansion team of the league, which began play in 2006. The Dynamo is owned by Gabriel Brener, Jake Silverstein, Ben Guill, and world Olympic boxing champion Oscar De La Hoya.
Houston Dynamo's domestic success consists of winning the 2006 and 2007 MLS Cups in their first two seasons. They also won the U.S. Open Cup in 2018. In 2008, Houston became the first American club to secure a point on Mexican soil in the CONCACAF Champions League era during the 2008–2017 format of the tournament On December 2, 2010, Harris County and the Houston Sports Authority reached an agreement for the 20,000–22,000-seat soccer-specific stadium in Downtown Houston east of Minute Maid Park, across Highway 59 which would be the third sporting facility for Downtown Houston. The venue, now known as BBVA Compass Stadium, opened on May 12, 2012, against D.C. United.
Aside from Major League Soccer and international soccer matches, the new Dynamo stadium also hosts Texas Southern University football, concerts, boxing matches, and much more.