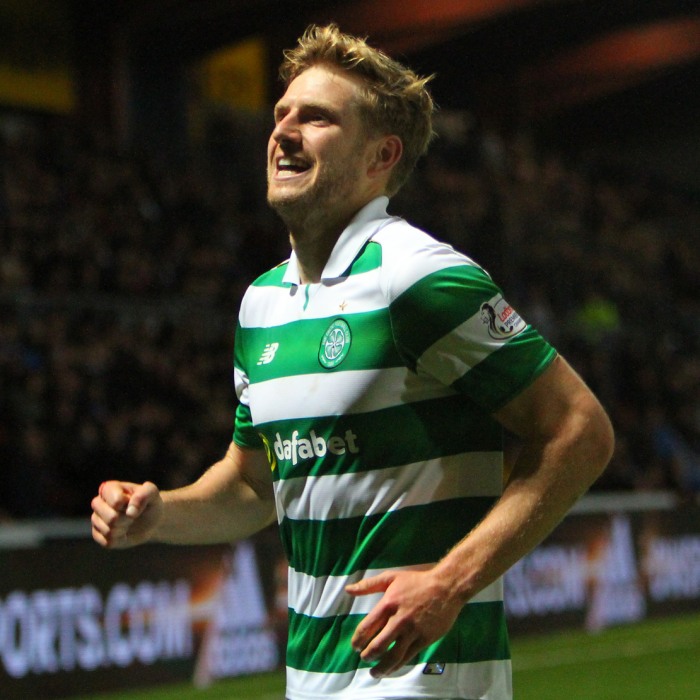 Stuart Armstrong (born 30 March 1992) is a Scottish professional footballer who plays as a midfielder for Premier League club Southampton and the Scotland national team.
He began his career with Dundee United, making his debut in 2010 and going on to make almost 150 appearances before joining Celtic in February 2015. He represented Scotland at under-19 and under-21 level, then made his full international debut in 2017.

Armstrong training with Dundee United.
He made his first team debut for Dundee United in November 2010, coming on as a substitute in a 1–0 win over Hamilton. Two months later, on 12 January 2011, he provided his first assist, crossing for David Goodwillie to score as his side won 2–0 against Motherwell. Throughout the rest of the season, Armstrong was in and out of the team, making twelve appearance. Manager Peter Houston praised Armstrong on his substitute role.

The next season, Armstrong swapped between starting and coming off the bench as an impact sub. In a match against Inverness Caledonian Thistle, on 10 December 2011, he provided a double assist, in the second-half, to make a comeback win, which his side won 3–2. Armstrong then scored his first goal for United in a 2–2 draw against St Mirren in December 2011. After the match, Armstrong says scoring his first goal was his first proper strike, having scored but it was deflected against Inverness.

The next season, Armstrong made his European debut in the Europa League Qualifiers third round; second leg, in a 5–0 loss against Russian side Dynamo Moscow, putting Dundee United out of the competition, after coming on as a substitute for John Rankin. After making six appearance this season, Armstrong agreed a three-year contract with Dundee United in September 2012. After signing a new deal, Manager Houston believes that Armstrong can make an impact and that he could follow former teammates such as Goodwillie, Scott Robertson, Paul Dixon and Morgaro Gomis. On 24 November 2012, Armstrong scored his first goal of the season, in a 2–1 win over Ross County from a header, which he nicked the goal from Jon Daly. After the match, Armstrong then apologised to Daly and described this as "the furthest out finish of his career". A few week later in mid-December, Armstong provided a double assist back to back in two consecutive matches against rivals Dundee and Inverness. On 30 December 2012, Armstrong scored his second goal of the season, in a 4–3 loss against St Mirren. Armstrong next goal came against Celtic on 16 February 2013, in a 6–2 loss. Having made six appearances in February, Armstrong was awarded Clydesdale Bank Premier League Young Player of the Month.

Towards the end of the season, Armstrong was nominated for SPFA young player of the year, but it was awarded to Hibernian's Leigh Griffiths. He did, however, go on to win the SFWA Young Player of the Year award.

In the 2013–14 season, Armstrong started his season well, scoring two goals in two games against Hibernian and St Johnstone. Armstrong and Dundee United began negotiations over a new contract in early December and on 12 December 2013, he signed a one-year contract extension. Armstrong expressed an ambition to play in England in the future, but said he was happy to wait until he had established himself in the first team. In the January 2014 transfer window, the Daily Mail reported that Celtic were considering making a move for Armstrong, and that they were also interested in some of the club's other youngsters. This was later dismissed as "speculation" by Celtic manager Neil Lennon.

During the 2014–15 season, Armstrong continued to be orchestrator of United's excellent moves. He scored once and claimed two assists in November 2014 in wins over Kilmarnock and Motherwell. Armstrong scored twice more in league victories in December 2014 against Ross County and Celtic. He also registered assists in back-to-back matches in December 2014, in the defeat of Celtic and then the league defeat to St Johnstone In January 2015, Armstrong claimed a further two league goals and three assists in victories against Dundee and Hamilton Accies and another league goal in a draw with St Mirren. His last match for Dundee United came in a New Firm derby defeat of Aberdeen to help United reach the final of the Scottish League Cup on 31 January 2015.

Armstrong made 150 appearances, starting 109 matches, and scored 22 goals in all competitions for Dundee United before joining Celtic.