Thierry Daniel Henry (born 17 August 1977) is a French professional football coach and former player who is an assistant coach for the Belgium national team. Considered one of the greatest strikers of all time and one of the greatest players in the history of the Premier League, Henry was runner-up for the Ballon d'Or in 2003, FIFA World Player of the Year in 2004 and third place for the Ballon d'Or in 2006. He was named the PFA Players' Player of the Year twice, the FWA Footballer of the Year three times, and was named in the PFA Team of the Year six consecutive times. He was also included in the FIFA FIFPro World XI once and the UEFA Team of the Year five times. He was one of the most commercially marketed footballers during the 2000s. Henry, along with Alan Shearer, was one of the inaugural inductees into the Premier League Hall of Fame in 2021.

Henry made his professional debut with Monaco in 1994 before signing for defending Serie A champions Juventus. However, limited playing time, coupled with disagreements with the club's hierarchy, led to him signing for Premier League club Arsenal for £11 million in 1999. Under long-time mentor and coach Arsène Wenger, Henry became a prolific striker and Arsenal's all-time leading scorer with 228 goals in all competitions. He won the Premier League Golden Boot a record four times, won two FA Cups and two Premier League titles with the club, including one during an unbeaten Invincible season. Henry spent his final two seasons with Arsenal as club captain, leading them to the 2006 UEFA Champions League Final. Henry transferred to Barcelona in 2007 and in the 2008–09 season, he was a key part of the club's historic treble when they won La Liga, the Copa del Rey, and the UEFA Champions League. In 2010, he joined Major League Soccer (MLS) club New York Red Bulls and returned to Arsenal on loan for two months in 2012, before retiring in 2014.

Henry had success with France, winning the 1998 FIFA World Cup, UEFA Euro 2000 and 2003 FIFA Confederations Cup. He was named French Player of the Year a record five times, named to the UEFA Euro 2000 Team of the Tournament, awarded both the 2003 FIFA Confederations Cup Golden Ball and Golden Shoe, and named to the 2006 FIFA World Cup All-Star Team. In October 2007, he became his country's record goalscorer. After amassing 123 appearances and 51 goals, Henry retired from international football after the 2010 FIFA World Cup.

After retiring, Henry transitioned into coaching. He began coaching Arsenal's youth teams in February 2015, in tandem with his work as a pundit for Sky Sports. In 2016, he was appointed as an assistant coach at Belgium, before assuming the role as the head coach at Monaco in 2018. He was relieved of his duties at Monaco in January 2019 and returned to MLS less than a year later to manage Montréal Impact. He led Montréal to the playoffs in the 2020 season before departing in 2021.

Henry enjoyed a successful career with the France national team, winning the first of his 123 caps in June 1997, when his good form for Monaco was rewarded with a call-up to the Under-20 French national team, where he played in the 1997 FIFA World Youth Championship alongside future teammates William Gallas and David Trezeguet. Within four months, France head coach Aimé Jacquet called Henry up to the senior team. The 20-year-old made his senior international debut on 11 October 1997 in a 2–1 win against South Africa. Jacquet was so impressed with Henry that he took him to the 1998 FIFA World Cup. Although Henry was a largely unknown quantity at international level, he ended the tournament as France's top scorer with three goals. He was scheduled to appear as a substitute in the final, where France beat Brazil 3–0, but Marcel Desailly's sending off forced a defensive change instead. In 1998, he was made a Knight of the Legion of Honour, France's highest decoration.

Henry was a member of France's UEFA Euro 2000 squad, again scoring three goals in the tournament, including the equaliser against Portugal in the semi-final, and finishing as the country's top scorer. France later won the game in extra time following a converted penalty kick by Zinedine Zidane. France went on to defeat Italy in extra-time in the final, earning Henry his second major international medal. During the tournament, Henry was voted man of the match in three games, including the final against Italy.

The 2002 FIFA World Cup featured a stunning early exit for both Henry and France as the defending champions were eliminated in the group stage after failing to score a goal in all three games. France lost against Senegal in their first group match and Henry was red carded for a dangerous sliding challenge in their next match against Uruguay. In that game, France played to a 0–0 draw, but Henry was forced to miss the final group match due to suspension; France lost 2–0 to Denmark.

Henry returned to form for his country at the 2003 FIFA Confederations Cup. Despite playing without team stalwarts Zidane and Patrick Vieira, France won, in large part owing to Henry's outstanding play, for which he was named Man of the Match by FIFA's Technical Study Group in three of France's five matches. In the final, he scored the golden goal in extra time to lift the title for the host country after a 1–0 victory over Cameroon. Henry was awarded both the Adidas Golden Ball as the outstanding player of the competition and the Adidas Golden Shoe as the tournament's top goalscorer with four goals.

In UEFA Euro 2004, Henry played in all of France's matches and scored two goals. France beat England in the group stage but lost to the eventual winners Greece 1–0 in the quarter-finals. During the 2006 FIFA World Cup Henry remained as one of the automatic starters in the squad. He played as a lone striker, but despite an indifferent start to the tournament, became one of the top players of the World Cup. He scored three goals, including the winning goal from Zidane's free kick against defending champions Brazil in the quarter-final. However, France subsequently lost to Italy on penalties (5–3) in the final. Henry did not take part in the penalty shoot-out, having been substituted in extra time after his legs had cramped. Henry was one of ten nominees for the Golden Ball award for Player of the Tournament, an award which was ultimately presented to his teammate, Zidane and was named a starting striker on the 2006 FIFPro World XI team.

On 13 October 2007, Henry scored his 41st goal against the Faroe Islands, joining Michel Platini as the country's top goalscorer of all time. Four days later at the Stade de la Beaujoire, he scored a late double against Lithuania, thereby setting a new record as France's top goalscorer. On 3 June 2008, Henry made his 100th appearance for the national team in a match against Colombia, becoming the sixth French player ever to reach that milestone.

Henry missed the opening game of France's short-lived UEFA Euro 2008 campaign, where they were eliminated in the group stages after being drawn in the same group as Italy, the Netherlands and Romania. He scored France's only goal in the competition in a 4–1 loss to the Netherlands.

The French team struggled during the 2010 FIFA World Cup qualifiers and finished second in their group behind Serbia. During the play-offs against the Republic of Ireland, Henry was involved in a controversy in the second leg of the game at the Stade de France on 18 November 2009. With the aggregate score tied at 1–1 and the game in extra time, he used his hand twice to control the ball before delivering a cross to William Gallas who scored the winner. This sparked a barrage of criticism against the Frenchman, while national team coach Raymond Domenech and Arsenal manager Arsène Wenger defended him. The Football Association of Ireland lodged a formal complaint with FIFA, seeking a replay of the game, which FIFA declined. Henry said that he contemplated retiring from international football after the reactions to the incident, but maintained that he was not a "cheat"; hours after FIFA had ruled out a replay, he stated that "the fairest solution would be to replay the game". FIFA President Sepp Blatter described the incident as "blatant unfair play" and announced an inquiry into how such incidents could be avoided in future, and added that the incident would be investigated by the Disciplinary Committee. Blatter also said Henry told him that his family had been threatened in the aftermath of the incident. In January 2010, FIFA announced that there was no legal basis to sanction Henry.

Henry did not feature in the starting line-up for France at the 2010 FIFA World Cup. France drew in their first game against Uruguay, and lost 2–0 in their second against Mexico. The team was thrown into disarray when Nicolas Anelka was expelled from the team, and captain Patrice Evra led a team protest by refusing to train. In the final group game against host-nation South Africa in which Henry came on as a second-half substitute, France lost 2–1 and were eliminated from the tournament. He then announced his retirement from international football, having won 123 caps and scored 51 goals for Les Bleus, thus finishing his international career as France's all-time top scorer, and second most capped player after Lilian Thuram.

Henry married English model Nicole Merry, real name Claire, on 5 July 2003. The ceremony was held at Highclere Castle, and on 27 May 2005 the couple celebrated the birth of their first child, Téa. Henry dedicated his first goal following Téa's birth to her by holding his fingers in a "T" shape and kissing them after scoring in a match against Newcastle United. When Henry was still at Arsenal, he also purchased a home in Hampstead, North London. However, shortly after his transfer to Barcelona, it was announced that Henry and his wife would divorce; the decree nisi was granted in September 2007. Their separation concluded in December 2008 when Henry paid Merry a divorce settlement close to her requested sum of £10 million.

As a fan of the National Basketball Association (NBA), Henry is often seen with his friend Tony Parker at games when not playing football. Henry stated in an interview that he admires basketball, as it is similar to football in pace and excitement. Having made regular trips to the NBA Finals in the past, he went to watch Parker and the San Antonio Spurs in the 2007 NBA Finals; and in the 2001 NBA Finals, he went to Philadelphia to help with French television coverage of the Finals as well as to watch Allen Iverson, whom he named as one of his favourite players. 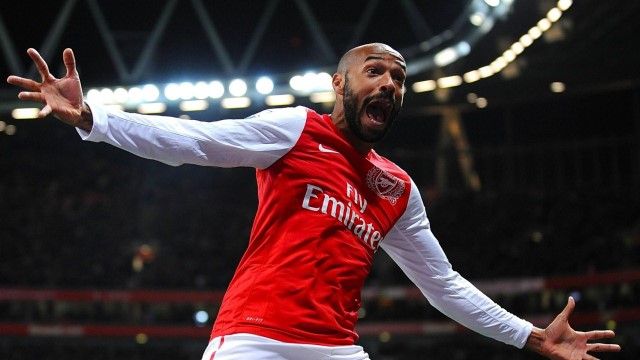 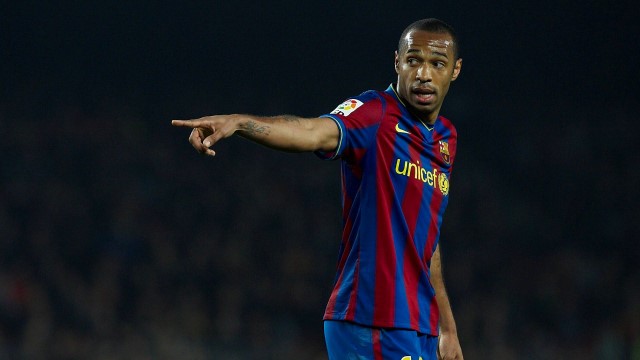