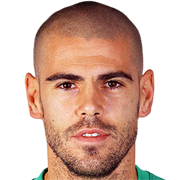 Although he had offers from several clubs in Spain to prolong his career, Valdés retired from professional football in August 2017.

He spent most of his professional career with Barcelona in La Liga, and is regarded as one of the best goalkeepers in the club's history, having appeared in 535 official games for the club and won 21 major titles, notably six La Liga titles and three UEFA Champions League championships. Valdés also won the Zamora Trophy a record five times. He currently holds the club records as goalkeeper with most appearances in the league and in official competition, breaking Andoni Zubizarreta's records during the 2011–12 season. After leaving Barcelona at the end of his contract in July 2014, he joined Manchester United in January 2015. He played rarely at United, and after a brief loan at Standard Liège, he moved on to Middlesbrough.

Valdés made his full international debut in 2010 and earned 20 international caps. He was part of the Spanish squads which won the 2010 FIFA World Cup and UEFA Euro 2012.

Born in L'Hospitalet de Llobregat, Barcelona, Catalonia, Valdés started his career with FC Barcelona's youth team when he joined from Peña Cinco Copas on 1 July 1992. That September, he moved with his family to Tenerife and had to leave the club, but returned three years later. After returning, he made quick progress through the youth teams.