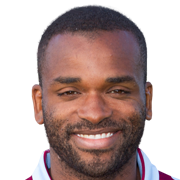 Darren Ashley Bent (born 6 February 1984) is an English professional footballer who plays as a striker .
Without Club Last club: Derby
Bent started his career with Ipswich Town. After progressing through their youth system he made his first team debut in 2001.

Bent was born in Tooting, London to a family of Jamaican descent. His father, Mervyn Bent, was a player in the youth systems of Wimbledon and Brentford. He moved to Huntingdon, Cambridgeshire at age ten and attended Hinchingbrooke school and played for the Godmanchester Rovers youth system. As a youngster, Bent was a supporter of Arsenal and used to have a season ticket at Highbury. He was handed a formal caution by police in June 2004 after he was alleged to have shot a 12-year-old with a pellet gun. Bent refrains from drinking alcohol and is a Christian.

Bent received his first call up to the senior England team for the friendly against Denmark on 17 August, but did not play in the match. His England debut eventually came on 1 March 2006, when he started against Uruguay at Anfield in a pre-2006 FIFA World Cup friendly match. He was not included in England's World Cup squad when it was announced in May 2006.

Despite having played for the senior team, Bent was recalled to the under-21 squad for their October 2006 qualification play-offs against Germany. Later that month, he was recalled to the senior squad due to an injury to Andrew Johnson shortly after the squad's announcement. He was called to the England squad for a UEFA Euro 2008 qualifier against Croatia in November 2007. He came on as an 80th-minute substitute as England lost 3–2 and failed to qualify for the tournament. He was called up to the team for a 2010 World Cup qualifier against Ukraine in March 2009 following an injury to striker Carlton Cole. He made his second start for England in a 1–0 friendly defeat to Brazil on 14 November 2009. Bent was named in England's preliminary 30-man squad for the 2010 World Cup on 11 May 2010, although he was eventually omitted from the final 23-man squad on 1 June.

Bent scored his first international goal in England's 3–1 away win over Switzerland after appearing as a substitute for Jermain Defoe in a Euro 2012 qualifier on 7 September 2010. Then-England manager Fabio Capello stated he had been impressed with the improvement in Bent's all-round game since his World Cup omission and selected him in the starting 11 for England's friendly with Denmark, where he scored a tap-in from a Theo Walcott cross. Bent retained his place for England's Euro 2012 qualifier with Wales to make his first competitive international start on 26 March 2011. In scoring England's second goal, he took his tally to three goals in his last three matches. Bent recovered from injury in time but was left out of the final 23-man squad for Euro 2012 as then-England manager Roy Hodgson felt Bent would not be fit enough to appear at the tournament.