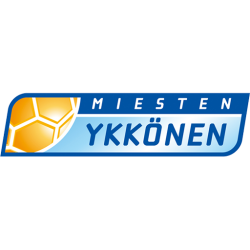 Ykkönen (Finnish for 'Number One'; Swedish: Ettan) is the second highest level of the Finnish football league system (after the Veikkausliiga), although it is the highest league managed by the Football Association of Finland.

The first league format competition in the second level of Finnish football was called Suomensarja, which was founded in 1936. Before the inauguration of the Suomensarja, from 1930 to 1935, there had been special qualification matches for the right to play in the Mestaruussarja.

In the autumn of 1969, the Finnish football underwent a league system reform, and the Suomensarja was renamed II divisioona, or 2nd Division, with regional sections.

In 1973, this level of football in Finland became nationwide, and the new name was 1. divisioona (First Division). The name Ykkönen has been used since 1995.