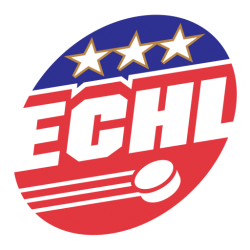 The ECHL (formerly the East Coast Hockey League) is a mid-level professional ice hockey league based in Princeton, New Jersey, with teams scattered across the United States and Canada. It is a tier below the American Hockey League.

The ECHL and the AHL are the only minor leagues recognized by the collective bargaining agreement between the National Hockey League and the National Hockey League Players' Association, meaning any player signed to an entry-level NHL contract and designated for assignment must report to a club in either the ECHL or the AHL. Additionally, the league's players are represented by the Professional Hockey Players' Association in negotiations with the ECHL itself. Some 662 players have played at least one game in the NHL after appearing in the ECHL.

For the 2020–21 season, 24 of the 31 National Hockey League teams have affiliations with either an active or dormant ECHL team with the Carolina Hurricanes, Columbus Blue Jackets, Los Angeles Kings, Montreal Canadiens, Ottawa Senators, St. Louis Blues, and San Jose Sharks having no official ECHL affiliations. The ECHL has one independent team, the Norfolk Admirals, which is also dormant for the 2020–21 season. However, NHL teams do sometimes lend contracted players to other unaffiliated ECHL teams for development and increased playing time.

The league's regular season typically begins in October and ends in April. The most recent ECHL champion is the Newfoundland Growlers, a 2018–19 expansion team that won the title in its inaugural season. There was no champion in 2020 due to the COVID-19 pandemic.