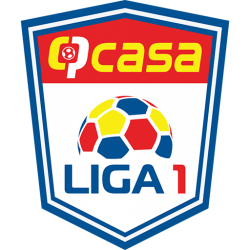 The Liga I, also spelled Liga 1, is a Romanian professional league for men's association football clubs. It is currently sponsored by betting company Casa Pariurilor, and thus officially known as the Casa Liga 1. At the top of the Romanian football league system, it is the country's primary football competition. Contested by 14 clubs, it operates on a system of promotion and relegation with Liga II. The teams play 26 matches each in the regular season, and then enter the championship play-off or the relegation play-out according to their position in the regular season.

Liga I was established in 1909 and commenced play for the 1909–10 campaign, being currently on the 29th place in UEFA's league coefficient ranking list. It is administered by the Liga Profesionistă de Fotbal (LPF). Before the 2006–07 season, the competition was known as Divizia A, but the name had to be changed following the finding that someone else had registered that trademark.

The best performer is FCSB with 26 titles, followed by cross-town rival Dinamo București with 18 trophies. Of the remaining 21 clubs which came victorious in the competition, eight have won it on at least three occasions—Venus București, UTA Arad, Chinezul Timișoara, Universitatea Craiova, Petrolul Ploiești, Ripensia Timișoara, Rapid București and CFR Cluj. The latter has only been remarkably successful in the 21st century.