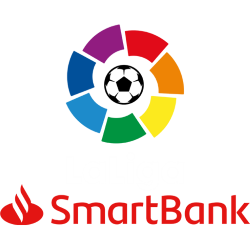 The Campeonato Nacional de Liga de Segunda División, commercially known as LaLiga 2 and stylized as LaLiga SmartBank for sponsorship reasons, is the men's second professional association football division of the Spanish football league system. Administrated by the Liga de Fútbol Profesional, it is contested by 22 teams, with the top two teams plus the winner of a play-off promoted to LaLiga and replaced by the three lowest-placed teams in that division.

This championship was created in 1929 by the Royal Spanish Football Federation. The league has been national, single-table except for a period from 1949 to 1968 in which it was regionalized into two North and South groups. Since 1984 it has been organized by the Liga de Fútbol Profesional.

From 2006, the Liga de Fútbol Profesional had a ten-year sponsorship agreement with the banking group BBVA. Initially rebranded as Liga BBVA, the Segunda División was renamed Liga Adelante two years later, after the BBVA sponsorship was extended to the Primera División, which received the Liga BBVA name. Another banking group, Banco Santander, took over the sponsorship of both divisions in 2016, upon which the Segunda División was renamed La Liga 1|2|3, before being renamed LaLiga Smartbank in time for the 2019–20 season.

Since the 2010–11 season, a play-off has been played between the teams that finished 3rd to 6th (reserve teams are not eligible for promotion).

League format
The league contains 22 teams that play each other home and away for a 42-match season. Each year three teams are promoted to La Liga. The top two teams earn an automatic promotion. The third team to be promoted is the winner of a play-off between the teams that finished 3rd to 6th (reserve teams are not eligible for promotion). The play-offs comprise two-legged semi-finals followed by a two-legged final. The bottom four are relegated to Segunda División B.