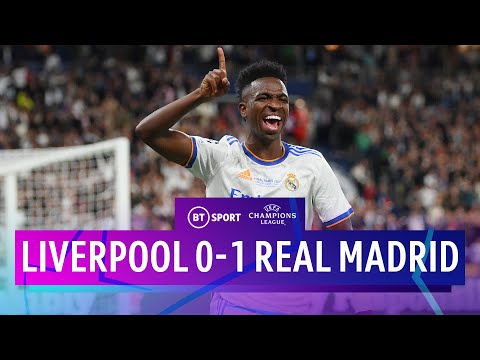 The 2022 UEFA Champions League Final was the final match of the 2021–22 UEFA Champions League, the 67th season of Europe's premier club football tournament organised by UEFA, and the 30th season since it was renamed from the European Champion Clubs' Cup to the UEFA Champions League. It was played at the Stade de France in Saint-Denis, France, on 28 May 2022, between English club Liverpool and Spanish club Real Madrid. It was the third time the two sides have met in the European Cup final, after 1981 and 2018, the third final held here, after the 2000 and 2006 finals, and the first time the same two teams have met in three finals.

This was the first final to be played in front of a full attendance since the 2019 final, as the previous two finals were affected by the COVID-19 pandemic.

The final was originally scheduled to be played at the Allianz Arena in Munich, Germany. After the postponement and relocation of the 2020 final, the final hosts were shifted back a year, so the 2022 final was given to the Krestovsky Stadium in Saint Petersburg. Following the Russian invasion of Ukraine on 24 February, UEFA called an extraordinary meeting of the executive committee, where it was expected to officially pull the match out of Russia. A day later, it announced the final would move to the Stade de France in Saint-Denis, located just north of Paris.


Result Description
Real Madrid won the match 1–0 via a 59th-minute goal from Vinícius Júnior for a record-extending 14th title, and their 5th in nine years. As the winners of the 2021–22 UEFA Champions League, Real Madrid earned the right to play against the winners of the 2021–22 UEFA Europa League, Eintracht Frankfurt, in the 2022 UEFA Super Cup. Additionally, the winners typically qualify for the annual FIFA Club World Cup. However, the tournament's status remains uncertain, following FIFA's proposal for a format overhaul.