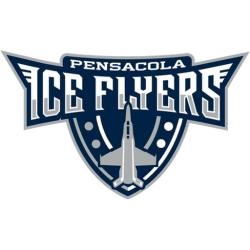 The Pensacola Ice Flyers are a professional ice hockey team of the Southern Professional Hockey League. The team played their first season in 2009–10. Home games are played at the Pensacola Bay Center, previously home to the ECHL's Pensacola Ice Pilots from 1996 until their folding in 2008.

The "Ice Flyers" name has a double meaning – it is both a tribute to Pensacola's heritage in naval aviation (Naval Air Station Pensacola is home to the legendary Blue Angels and the National Museum of Naval Aviation) and a homage to original owner Tim Kerr, who previously played eleven seasons with the National Hockey League's Philadelphia Flyers.

Pensacola Bay Center (formerly Pensacola Civic Center) is an indoor arena located in Pensacola, Florida. It is owned by Escambia County and operated by ASM Global. The Bay Center has a capacity of 8,049 for hockey games, and as much as 10,000 for non-hockey events. The arena contains 23,000 square feet (2,100 m2) of space and 10,000 square feet (1,000 m2) of meeting space.

The Escambia County Commission voted to rename the arena the Pensacola Bay Center on October 18, 2012 as part of a citywide rebranding effort begun by Pensacola Mayor Ashton Hayward.