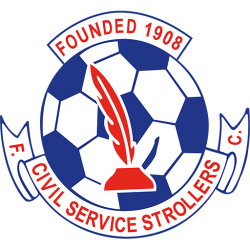 Founded in 1908 under the name Edinburgh Civil Service Football Club, their first ground was the Stenhouse Stadium, which later became a venue for greyhound racing, before moving to Pinkhill Stadium in the 1920s. They moved to the Edinburgh Area Civil Service Sports Association in Muirhouse in 1957, where they continue to play their home games, the ground is commonly known as Christie Gillies Park.

In 2000–01, the club entered into a partnership with Talloaks to develop youth football, with the Talloaks youth teams taking on the name 'CS Strollers'. At the start of the 2001–02 season, the partnership was extended to cover all other ages of organised football. 2001–02 saw the Strollers having, for the first time, a fully incorporated women's team.

Ahead of the 2016–17 season, they were elected to fill one of two vacancies in the Lowland Football League.

Their former management team was Alex Cunningham and Ricky Clapperton until Gary Jardine took over for the 2018–19 season.