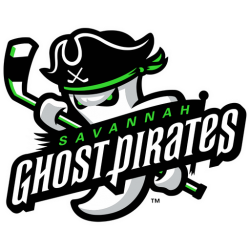 The Savannah Ghost Pirates are a professional minor league ice hockey team in the ECHL based in Savannah, Georgia. The team will begin play in the 2022–23 ECHL season with home games at the Enmarket Arena.

On May 19, 2022, the Ghost Pirates announced a one-year affiliation for the 2022–23 season with the Vegas Golden Knights of the National Hockey League (NHL), as well as their American Hockey League (AHL) affiliate, the Henderson Silver Knights. Additionally, former NHL player and Union Dutchmen head coach Rick Bennett was announced as Savannah's first head coach. The team is scheduled to play in the South Division, with the Atlanta Gladiators, Florida Everblades, Greenville Swamp Rabbits, Jacksonville Icemen, Orlando Solar Bears, and the South Carolina Stingrays, and potentially the expansion Athens ECHL team in 2023-24 barring division realignment. The expansion of Savannah into the league sent the Norfolk Admirals into the North Division, now letting all divisions have 7 teams.

Enmarket Arena is a multi-purpose complex in Savannah, Georgia, United States. It opened in February 2022 with a 9,500-seat arena, including twelve luxury suites, five lodge boxes, and a party suite. Enmarket Arena will be home to the Savannah Ghost Pirates of the ECHL, scheduled to begin play in the 2022–23 season.