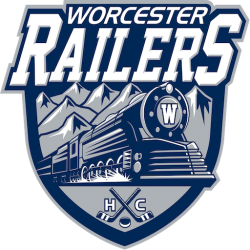 The Worcester Railers (also called Worcester Railers HC) are a professional ice hockey team based in Worcester, Massachusetts. The team began play in the 2017–18 ECHL season, and is a member of the North Division of the Eastern Conference of the ECHL. The team plays their home games at the DCU Center and are the ECHL affiliate of the New York Islanders. Due to the COVID-19 pandemic, the Railers voluntarily suspended operations through at least the 2020–21 ECHL season.

The team filled the void left by the AHL's Worcester Sharks, who relocated to San Jose, California, in 2015 to become the San Jose Barracuda.

The DCU Center (originally Centrum in Worcester, formerly Worcester's Centrum Centre and commonly Worcester Centrum) is an indoor arena and convention center complex in downtown Worcester, Massachusetts. The facility hosts a variety of events, including concerts, sporting events, family shows, conventions, trade-shows and meetings. It is owned by the City of Worcester and managed by SMG, a private management firm for public assembly facilities.