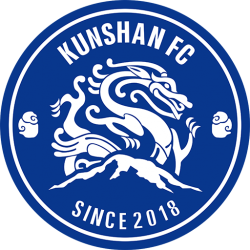 Kunshan Football Club (Chinese: 昆山足球俱乐部), or simply Kunshan F.C., is an association football club based in Kunshan, Jiangsu, China. They currently play in China League One, the second tier of Chinese football.

Zhenjiang Huasa, whose members are mainly the fans of FC Barcelona in China, was founded on 12 December 2014. Huasa, meaning Chinese Barca, was used as the club's name. They played in the 2016 China Amateur Football League and won the winners of 2016 Jiangsu Provincial Football League. Zhenjiang Huasa finished the 6th place in the national finals and won promotion to 2017 China League Two. In December 2018, Zhenjiang Huasa moved to Kunshan and changed their name to Kunshan F.C.. With the support of the Kunshan Municipal Party Committee and Municipal Government as well as private financing the club were able to gain stability, improve their position to 9th and gain a total of 80310 fans with the highest average attendance of 5534 at the end of the 2019 league season.

The Kunshan Sports Centre Stadium (Chinese: 昆山体育场) is a multi-purpose stadium in Kunshan, China. It is currently used mostly for soccer matches. The stadium holds 30,000 spectators.