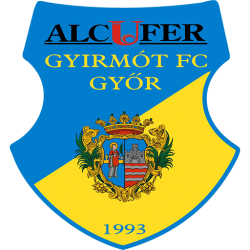 Gyirmót FC Győr is a Hungarian football club based in Gyirmót , a suburb of Győr. The club was founded in 1993 and its colors are yellow and blue. The team currently plays in the second division (Nemzeti Bajnokság II) of the Hungarian championship.

In the 2014–15 Nemzeti Bajnokság II season Gyirmót could not get promoted to the first division since they collected only two points in their last three matches. On the 28th day they lost at home to Sopron (0–1), drew with Mezőkövesd (2–2), and drew with Siófok (2–2). They finished third in the 2014–15 season.

Ménfői úti Stadion or Alcufer Stadion is a sports venue in Gyirmót, a district of Győr, Hungary. The stadium is home to the association football side Gyirmót FC Győr. The stadium has a capacity of 4,500.

On 22 September 2015, the stadium was opened. The first match was played against Dunaújváros PASE.

On 25 March 2016, the first international match was played at the stadium. Hungary (U-21) hosted Israel (U-21) in the 2017 UEFA European Under-21 Championship qualification Group 4 match. The final results was a goalless draw.

The stadium was selected to host the 2021 UEFA European Under-21 Championship.