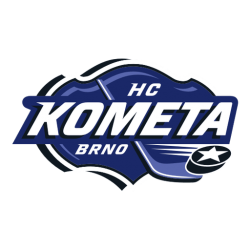 HC Kometa Brno ("Comet" in English) is a professional ice hockey team based in Brno, Czech Republic. They play in the Czech Extraliga. Kometa is the most successful ice hockey club in the Czech Republic with 13 Czechoslovak (and Czech) league championship titles. Holding three European Cup titles, Kometa ranks as the most successful Czech club in international ice hockey. The team HC Kometa Brno has won two Czech championships seasons, capturing the title in both 2016–2017 and in 2017–2018. DRFG Arena, formerly known as Starobrno Rondo Aréna, Hala Rondo and Kajot Arena, is an indoor arena in Brno, Czech Republic. The capacity of the arena is 7,700 people and it was built in 1982. It is currently home to the HC Kometa Brno ice hockey team.
Until 2011, the arena was named Hala Rondo. However, after Kajotbet started sponsoring the arena, it was renamed Kajot Arena. After the end of the contract, it was called "Rondo Hall" again until a new sponsorship with DRFG was signed in 2015, renaming the arena to DRFG Arena.