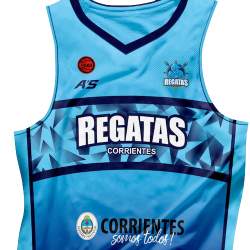 Club de Regatas Corrientes, usually just Regatas Corrientes, is a sports club of Corrientes, Argentina, located on the river side of the Paraná river. Although Regatas was born as a rowing institution, the club is mostly recognized due to its basketball team, which plays in the Liga Nacional de Básquet (Argentine first division). Its home stadium is the Estadio José Jorge Conte, that holds 5,000 people. The Estadio José Jorge Contte is an indoor arena in Corrientes, Argentina. It is primarily used for basketball and is the home arena of Regatas Corrientes. It's one of the biggest in the north region of Argentina, holding 5,500 people.

It hosted the 2015 FIVB Volleyball Boys' U19 World Championship.