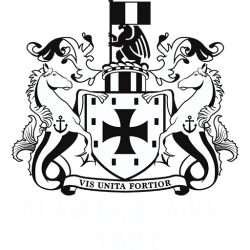 Marine Football Club is an English football club based in Crosby, Merseyside. The club, which was founded in 1894, is a member of both the Liverpool County and Lancashire County Football Associations, and currently plays in the Northern Premier League Division One North West.

Marine is notable for having the longest serving manager in post-war English football. Roly Howard occupied the post from 1972 to 2005 and a total of 1,975 games. His final match, in May 2005, was a 1–0 defeat against Everton in the Liverpool Senior Cup final.

Rossett Park is a football ground in Crosby, Merseyside that has been home to Marine A.F.C. since 1904. It has been called the Marine Travel Arena for sponsorship since 2015.

Rossett Park has three sides with the primary covered stand, including the modest press area, behind one of the goals. The dugout length of the field is behind residences on Rossett Road. Marine A.F.C.'s supporters association operates a merchandise shop at the ground.