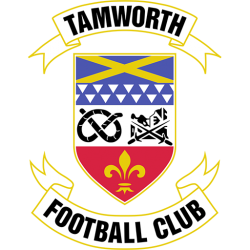 Tamworth Football Club is an English association football club based in Tamworth, Staffordshire. The club participates in the Southern League Premier Division Central under the management of Andrew Danylyszyn and Gary Smith.

The club was formed in 1933 after the previous Tamworth club, Tamworth Castle, ceased to exist. After playing in the Birmingham Combination and West Midlands (Regional) League, the team reached the Southern League in 1972, but subsequently fell on hard times and returned to lower level football. In 1989 Tamworth returned to the Southern League and a year later won the FA Vase. Tamworth reached the final of the FA Trophy in 2003 and in the same season won promotion to the Football Conference, going on to spend four seasons at the highest level of non-League football before being relegated to the Conference North. In 2009 the club gained promotion back to the Conference Premier, and spent five seasons at that level before being relegated. Further relegation in 2018 took the club back to the Southern League.

The team originally played at The Jolly Sailor Ground but after a year moved into The Lamb Ground, named after a pub which formerly stood nearby. The stadium currently has a capacity of just under 5,000 and a 3G artificial pitch which was laid in 2016. Local rivals include Burton Albion and Nuneaton Town, and to a lesser degree Atherstone Town, Bedworth United and Bolehall Swifts.

The Lamb Ground is a football stadium in the district of Kettlebrook, in Tamworth, Staffordshire, England and the home of Tamworth F.C. It is approximately half a mile south of Tamworth railway station.