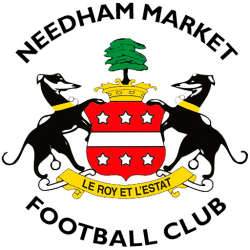 Needham Market Football Club is a football club based in Needham Market, Suffolk, England. They are currently members of the Southern League Premier Division Central and play at Bloomfields.

Although records show the existence of a Needham Market Football Club during the late 1890s, the modern club was officially established in 1919. They subsequently joined the Ipswich & District League. After finishing as runners-up in Division 3A in 1930–31 and 1931–32, the club were promoted to Division Two A. They went on to win Division Two A in 1932–33 and were runners-up the following season. After World War II they won the Division Two title in 1946–47 and went on to win Division One in 1952–53. The club won the League Cup in 1977–78 and again in 1979–80. However, they finished bottom of the Senior Division in 1983–84 and were relegated to Division One. However, they won the Suffolk Junior Cup the following season.

In 1986–87 Needham Market were Division One runners-up, earning promotion back to the Senior Division. They went on to win the Suffolk Senior Cup in 1989–90. In 1995–96 the club were Senior Division champions, and were promoted to Division One of the Eastern Counties League. They were Division One runners-up in 2004–05 and were promoted to the Premier Division, winning the Suffolk Senior Cup in the same season. In 2006–07 the club win the East Anglian Cup, before going on to finish as runners-up in the Premier Division and win the League Challenge Cup and the Suffolk Premier Cup in 2007–08, as well as reaching the semi-finals of the FA Vase, losing 4–2 on aggregate to Kirkham & Wesham.

The 2009–10 season saw Needham Market win the Premier Division title and the League Cup double, earning promotion to Division One North of the Isthmian League. In their first season in Division One, Needham finished as runners-up, qualifying for the promotion play-offs. However, they lost 3–1 at home to Brentwood Town in the semi-finals. The following season the club finished third and reached the play-off final, but lost 1–0 to Enfield Town. They qualified for the play-offs again after finishing fifth in 2013–14, this time losing 1–0 to Witham Town in the semi-finals. The club went on to win the division the following season, earning promotion to the Premier Division. In 2016–17 they won the Suffolk Premier Cup for a second time.

Needham Market were transferred to the Premier Central division of the Southern League at the end of the 2017–18 season as part of the restructuring of the non-League pyramid.