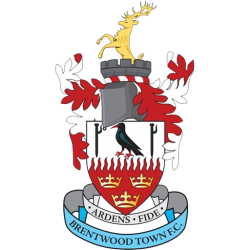 Brentwood Town Football Club is a football club based in Brentwood, Essex, England. They are currently members of the Isthmian League North Division and play at the Brentwood Centre Arena.

A Brentwood Football Club was established in the 19th century, and played in the FA Cup several times, reaching the quarter-finals in 1885–86, where they were beaten 3–1 by eventual winners Blackburn Rovers. They were also briefly members of Division One of the South Essex League for the 1896–97 season, but left after finishing bottom of the division. The club were later replaced as the town's main club by amateur club Brentwood & Warley. Brentwod & Warley joined Division One A of the South Essex League in 1921 and were runners-up in their first season in the league. They finished bottom of Division One in 1926–27, but were runners-up the following season, after which they joined Division One East of the Spartan League.

League reorganisation at the end of the 1928–29 season saw Brentwood & Warley placed in the Premier Division, where they remained until leaving the league at the end of the 1933–34 season. They rejoined the league in 1948, and were runners-up in 1948–49. In 1951 they were founder members of the Delphian League and were its inaugural champions. The club went on to win the league again in 1958–59 and 1959–60. In 1963 they joined Division Two of the Athenian League in 1963 after the Delphian League was disbanded.

In 1965 the club turned professional and became Brentwood Town. Playing at the Hive on Ongar Road, the renamed club left the amateur Athenian League to join the Metropolitan League. After two third-place finishes and a League Cup win in 1966–67, the club moved up to Division One of the Southern League in 1967. In 1968–69 they won Division One, and were promoted to the Premier Division. In the same season the club also reached the second round of the FA Cup, where they lost 10–1 at Southend United. The following season the club reached the third round of the cup; they beat Football League club Reading 1–0 in the first round, before defeating Hendon 2–0 in the second round. The third round saw them drawn at home against Northampton Town, with a record crowd of over 4,000 seeing the club lose 1–0. In the league the club briefly topped the table in September, and eventually finished ninth. However, at the end of the season the club directors decided to merge the club with Chelmsford City. The club's ground was sold for housing.