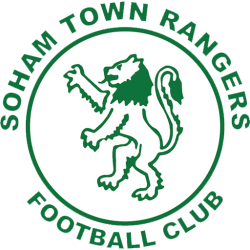 Soham Town Rangers Football Club is an English football club based in Soham, Cambridgeshire. The club are currently members of the Isthmian League North Division and play at Julius Martin Lane.

The merged club started in the Premier Division of the Cambridgeshire League. In 1956 they switched to the Peterborough & District League and two years later won the Challenge Cup. They retained it in 1958–59 and also applied to join the Eastern Counties League, but were unsuccessful. In 1959–60 they won the league for the first time, repeating the feat in 1961–62. In 1963 they applied to join the Eastern Counties League again, and this time were accepted. Discussions were held regarding a merger with local rivals Soham United, but nothing came of the talks.

After the ECL added a second division in 1988, Soham were relegated at the end of the 1988–89 season. In 1990–91 they won the Cambridgeshire Invitation Cup for the first time with a 4–1 win over March Town United. In 1992–93 they finished second in Division One and were promoted back to the Premier Division. They won the Invitation Cup again in 1997–98 and 1998–99. In 2000–01 they won the league's Millenium Trophy and another Invitation Cup was won in 2005–06. In 2007–08 they won their first ECL title after defeating Needham Market 4–0 in a title decider on the last day of the season. Following their victory they were promoted to the Midland Division of the Southern League. At the end of the 2010–11 season they were transferred to Division One North of the Isthmian League.