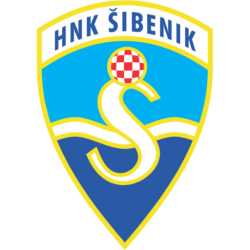 HNK Šibenik (Croatian: Hrvatski nogometni klub Šibenik, English: Croatian Football Club Šibenik), commonly referred to as HNK Šibenik or simply Šibenik, is a professional Croatian football club founded in 1932, and based in the city of Šibenik. It competes in the Croatian First Football League. Since 1948, the club's home ground has been the 3,412-seat Stadion Šubićevac. The team's traditional home colours are orange shirts with orange shorts and orange socks.

Šubićevac Stadium (Croatian: Stadion Šubićevac), commonly referred to as simply Šubićevac, is a multi-use stadium in Šibenik, Croatia which has been the home ground of HNK Šibenik since 1948. The stadium is named after the Šubićevac neighbourhood in which it is located.

The stadium was in the Communist era named after the leader of Yugoslav Partisans, Rade Končar, and known as Rade Končar Stadium (Croatian: Stadion Rade Končar). Last time it was renovated for the 1979 Mediterranean Games.