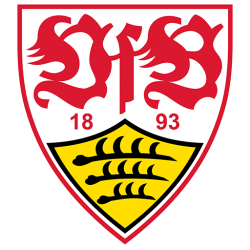 VfB Stuttgart II is a German football team located in Stuttgart, currently playing in the Oberliga Baden-Württemberg due to their relegation from the 3. Liga in the 2015–16 season. They are the reserve team of VfB Stuttgart. Until 2005 the team played under the name of VfB Stuttgart Amateure.

The Waldau-Stadion, known as the Gazi-Stadion auf der Waldau for sponsorship purposes, is a multi-use stadium in the Degerloch district in Stuttgart, Germany. The stadium is situated approximately 200m southwest of the Fernsehturm Stuttgart and holds 11,410 spectators (of these, 1,068 canopied seats and 4,949 canopied stands), which makes it the second biggest stadium in Stuttgart. It is home to the Stuttgarter Kickers, as of 2013 playing in the 3. Liga. The American Football team Stuttgart Scorpions uses the stadium in the German Football League and, since 2008, the VfB Stuttgart II, also playing in the 3. Liga, plays its home games here.

The Waldau-Stadion is the oldest stadium in Germany.