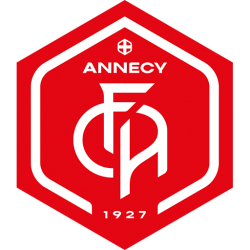 Football Club d'Annecy is a French football club based in the town of Annecy in Haute-Savoie. The team plays its home matches at the Parc des Sports, where the club and its predecessor have been based since 1964. Annecy club will compete in the 2022–23 Ligue 2.

Annecy Football Club was founded under its current name in 1993 as the reincarnation of the defunct Football Club d'Annecy. FC Annecy, formed in 1927, spent the majority of their history in regional amateur football. The club turned professional in 1942, but was compelled to return to amateurism a year later. When a national amateur league was formed for the 1948–49 season, Annecy became founder members. After eleven seasons, Annecy became the amateur champions of France at the end of the 1959–60 season, and after a short rise in the early 1970s shrank back into the obscurity that had characterised their early days.

The 1980s saw a sharp rise back up again, as FC Annecy won three promotions in nine years to reach France's second tier for the 1988–89 campaign. The club turned professional again following the first season in the division, and reached a peak in the 1990–91 season as the team performed well in both the Coupe de France and the league. After relegation in the 1992–93 season, the club capitulated in October 1993. Annecy Football Club was therefore established in its stead, taking up a league place five divisions below the third tier position that the former club had left. Though the new side won promotion twice within five years, Annecy then spent nine years in the sixth tier before meeting relegation again in the 2007–08 season.

Back-to-back promotions in 2015 and 2016, and a third promotion in six seasons in 2020, returned the club to the third tier Championnat National. In 2022, Annecy achieved promotion to Ligue 2.

Parc des Sports is a multi-use stadium in Annecy, France. It is used by Annecy F.C. and Evian Thonon Gaillard F.C. for their home matches. The capacity of the stadium is 15,660 spectators. It also hosted the 1998 World Junior Championships in Athletics.