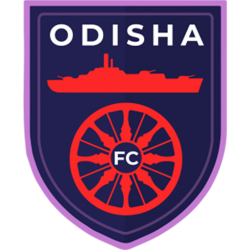 Odisha Football Club is an Indian professional football club based in Bhubaneswar, Odisha which competes in the Indian Super League under license from All India Football Federation (AIFF). The club began to play in October 2014 during the inaugural season of the Indian Super League. The team is owned by United States−based ship recycling company GMS Inc.

The club was rebranded as Odisha FC from Delhi Dynamos FC on 31 August 2019 and the base was shifted from Delhi (JLN Stadium) to Bhubaneswar (Kalinga Stadium).

The Kalinga Stadium is a multi-purpose International stadium in Bhubaneswar, Odisha, India. Its foundation stone was laid by former chief minister of Odisha Late Biju Patnaik in 1978. It is situated in the heart of Bhubaneswar near Nayapalli area. It has facilities for athletics, soccer, field hockey, basketball, tennis, table tennis basketball, volleyball, Wall climbing and swimming. Other features of the stadium includes an 8-lane synthetic athletics track, high performance centres, and India's first Olympic standard pink and blue water-based AstroTurf. It will be used for the 2020 FIFA U-17 Women's World Cup.