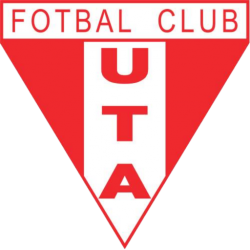 Founded in 1945 as IT Arad, they have won the national title six times and the national cup twice. Domestically, along with Chinezul Timișoara, UTA can be considered one of the most successful Romanian clubs of the 20th century, with only three teams winning more championships during that period—Steaua, Dinamo and Venus, all from Bucharest. After a decline which started in 1979 with a relegation to the second league, in 2014 the team was dissolved. With the support of fans, a new team started its way back from Liga IV, the fourth level of Romanian league system, and is credited as the official successor of the defunct club.

"The Old Lady" plays in red and white kits at the Motorul Stadium, as their traditional home ground, Francisc von Neuman, is currently under reconstruction.

Motorul Stadium is a multi-use stadium in Arad, Romania. It is currently used mostly for football matches and is the home ground of UTA Arad until the new Stadionul Francisc von Neuman is completed.