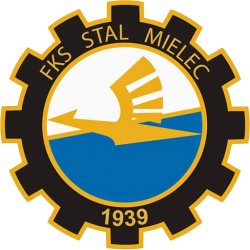 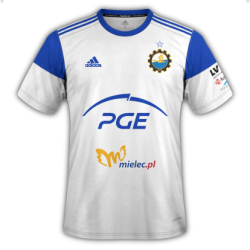 Stal Mielec is a Polish football club based in Mielec, Poland. The club was established on April 10, 1939. Historically, the club has enjoyed great successes within Poland's Ekstraklasa Premier League, winning the title twice (in 1973 and 1976) but has undergone significant management changes and financial difficulties within the past two decades that have forced the club from participation in the Premier League. After winning the Polish third-tier league title in 2016, Stal Mielec was promoted to I Liga, the second-tier league. The club also has a men's handball team that plays in the Superliga. The Stadion Miejski przy Solskiego 1 w Mielcu (English: Solskiego 1 Street Municipal Stadium in Mielec) is a multi-use stadium in Mielec, Poland with a 6,849 seating capacity. It has been the home ground of Stal Mielec since its opening in 1953. It is also used by the LKS Mielec athletic club. The stadium is also known as the Stadion Stali Mielec (English: Stal Mielec Stadium) in connection with its most common host.

During the fall of communism in Poland, and the years of economic hardship that followed, the club's performance declined and the stadium lacked funding for maintenance and repair. The structure of the stadium gradually deteriorated until in 2007 when the Mielec City Council voted to draft the reconstruction of the stadium, and construction work followed in 2011-2013. The modernised stadium, while reduced in capacity, has already served to revitalise the club's performance with Stal Mielec advancing to the I Liga in 2016. Mielec City Council is currently looking for more sponsorship opportunities, with the possibility of leasing the naming rights of the stadium.