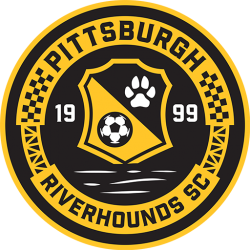 Pittsburgh Riverhounds SC is an American professional soccer team based in Pittsburgh, Pennsylvania. Founded in 1998 and beginning play in 1999, the club plays in the Eastern Conference of the USL Championship, the second tier of the American soccer pyramid. Since 2013, the Riverhounds have played their home games at the 5,000-seat Highmark Stadium, a soccer-specific stadium located in Station Square. Their current head coach is Bob Lilley. Saint Lucian international David Flavius currently holds the club records for most appearances and goals which he set over his eight seasons with the Riverhounds between 1999 and 2006. In June 2017, the Riverhounds entered into a developmental partnership with the Ocean City Nor'easters of the Premier Development League, running through the 2018 season.

In 2013, the Riverhounds organization announced its intentions to join Major League Soccer by 2023 (however, as of 2019, the MLS has not listed Pittsburgh in a list of possible expansion cities). Highmark Stadium initially seated 3,500 spectators, though the stadium is designed to be capable of being expanded to 18,500. Highmark Stadium is a 5,000-seat soccer-specific stadium in Pittsburgh's Station Square which is home to Pittsburgh Riverhounds SC of the USL Championship. The stadium was also home to the Pittsburgh Rebellion women's football team for 2017. Three local colleges use the stadium for soccer, lacrosse and rugby, and six different local high schools will use the field for soccer and lacrosse. The $10.2 million project began with the demolishing and excavating of the former Trib Total Media Amphitheatre, building foundations for the scoreboard, light poles and grading foundations for the grandstands as well as the installation of underground utilities. The field surface is FIFA 2-star certified artificial turf, the highest rating that an artificial surface can achieve, one of only six fields in the country to earn that rating. Other fields to earn this rating in the United States include: Providence Park, CenturyLink Field, and Gillette Stadium, all of which house Major League Soccer franchises.

On August 1, 2015, the supporters' section was renamed the Paul Child Stand in honor of Pittsburgh soccer legend Paul Child. About Highmark Stadium, Benjamin Zand of the BBC once said it is "probably the most beautiful stadium I've ever seen." Highmark Stadium is notable for its picturesque albeit unusual layout, with the Monongahela River in close proximity to the field. As a result, during daytime broadcasts of Riverhound matches, the river serves as a backdrop for the action on the field.