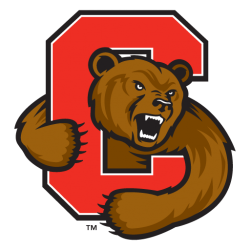 The Cornell Big Red men's basketball team represents Cornell University (one of eight members Ivy League), located in Ithaca, New York, in NCAA Division I men's competition. The Big Red's appearance in the 2008 NCAA Tournament was their first trip to "The Big Dance" since 1988. On March 14, 2016, Cornell did not renew the contract of head coach Bill Courtney, who was hired after the 2009–10 season.
Cornell played its first basketball game on December 13, 1898, a 48–12 victory over the Waverly YMCA. The team would finish the short season with a record of 1–3. The program did not record a winning season until 1908-1909 when the team went 13-10.

Newman Arena is a 4,473-seat multi-purpose arena at Cornell University in, located in Bartels Hall, which is adjacent to Lynah Rink. It is home to the Cornell Big Red basketball and volleyball teams. Its also holds the home of Cornell wrestling for larger events. It opened in January 1990, replacing Barton Hall, which was remodeled to become a full-time indoor track venue. It was named for the late F.R. Newman, Class of 1912, a major benefactor to the university.