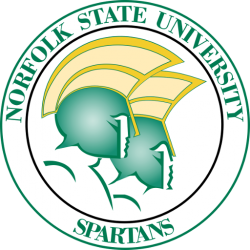 The Norfolk State Spartans men's basketball team represents Norfolk State University, located in Norfolk, Virginia, in NCAA Division I basketball competition. They currently compete in the Mid-Eastern Athletic Conference. The Spartans are currently coached by Robert Jones and play their home games at the Joseph G. Echols Memorial Hall (7,000).
The Spartans men's basketball team is best known for defeating the #2 seeded Missouri in the 2012 NCAA Men's Division I Basketball Tournament 86-84, the first tournament appearance for Norfolk State. It was only the fifth time that a 15th seed has defeated a 2nd seed.
The Spartans have appeared in one NCAA Division I Tournament. Their combined record is 1–1.

Joseph G. Echols Memorial Hall is a 4,500-seat multi-purpose arena in Norfolk, Virginia, located to the northeast of Dick Price Stadium on the eastern edge of Norfolk State University. It was built in 1982 to replace Gill Gymnasium as home to the Norfolk State Spartans men's and women's basketball and women's volleyball teams, as well as housing athletics offices and hosting the school's ROTC program. The seating bowl is divided into four sides, with three divided levels of seating colored green and gold, the school's colors. The hall is named for Joseph G. Echols, who is credited by the university as the person most responsible for the expansion of the school's athletics department to its current extents. It hosted the 1997 MEAC Men's Basketball Tournament.