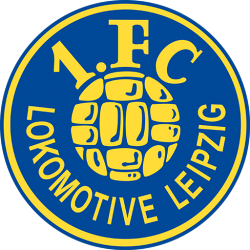 1. Fußballclub Lokomotive Leipzig e.V. is a German football club based in the city of Leipzig in Saxony and may be more familiar to many of the country's football fans as the historic side VfB Leipzig, the first national champion of Germany. The club won four cup titles and the 1965–66 Intertoto Cup during the East German era. It also finished runner-up in the 1986–87 European Cup Winners' Cup. 1. FC Lokomotive Leipzig was renamed VfB Leipzig after efter German re-unification and managed to qualify for the Bundesliga in 1993. However, as many clubs of the former DDR-Oberliga, VfB Leipzig faced hard times in re-unified Germany and a steady decline soon followed. 1. FC Lokomotive Leipzig was refounded in 2003 and has reclimbed through divisions. The team competes in the fourth tier Regionalliga Nordost as of 2020.

Bruno-Plache-Stadion is a multi-use stadium in Leipzig, Germany. It is currently used mostly for football matches and is the home stadium of Lokomotive Leipzig. Fans only call it "das Bruno" (the Bruno). The stadium has a capacity of 15,600 people, but it is only accredited for 7,000 people at the moment.

It was opened in August 1922. When it was opened, it was the largest stadium owned by a club in Germany, with a proposed capacity of over 40,000 people. After the World War II, the stadium was home to SC Rotation Leipzig, until 1990. In 1992, the German Football Association prohibited games to be held for the 2. Fußball-Bundesliga due to security requirements not being met. Since 2004, football matches are being held again at the stadium, which is now the home ground of 1. FC Lokomotive Leipzig. The city of Leipzig has full ownership of the stadium.