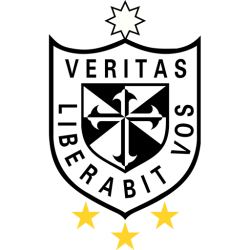 Club Deportivo Universidad San Martín de Porres, commonly known as USMP, is a Peruvian football club based in the city of Lima. The club was founded in 2004 as a joint stock company, the first in Peru. In just their first season, the club began playing in the Peruvian top-flight, the Torneo Descentralizado, after they bought the promotional place of the 2003 Segunda División winners, Sport Coopsol. The team obtained their first Descentralizado title in 2007, the second in 2008 and their third in 2010.

The name comes from the Universidad de San Martín de Porres, a university in Lima.

Estadio Miguel Grau is a multi-use stadium in the Bellavista District of Callao, Peru. The stadium is part of the Sport Village of Callao (Villa Deportiva del Callao) or Yahuar Huaca, which is owned by the Callao Regional Government since 2011. Its use is available to several football teams in the region including Sport Boys, Universidad de San Martín and Academia Cantolao who play their home matches here for the Torneo Descentralizado. The stadium's maximum capacity is 17,000 and was inaugurated on 16 June 1996 with a match between Sport Boys and Deportivo Pesquero for the 1996 Torneo Descentralizado. The match was a 3–1 win for Sport Boys. Floodlight towers were installed in 2003.