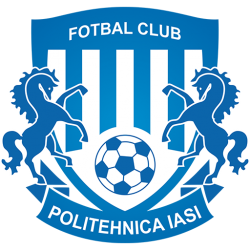 The team was formed in 2010 as ACSMU Politehnica Iași, following the dissolution of the original FC Politehnica Iași. It began competing in the second division and made its first Liga I appearance in the 2012–13 season. They achieved their best result in the latter competition in 2018 when they finished in sixth place.

Stadionul Emil Alexandrescu is the home ground of "the White and Blues" and has a capacity of 11,390.

Emil Alexandrescu Stadium is a multi-purpose stadium in Copou, Iaşi, Romania. It is used mostly for football matches and is the home field of FC Politehnica Iași (2010). The stadium is named after the former CSMS Iaşi player and Iaşi Mayor, Emil Alexandrescu, who died in 1992. Its original capacity was 12,500 seats but after plastic seats were mounted the capacity was reduced to 11,390 seats. 35th stadium in the country by capacity.