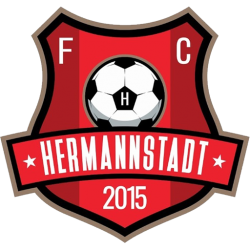 Asociația Fotbal Club Hermannstadt (commonly known as FC Hermannstadt, Hermannstadt or familiarly as Sibiu, is a Romanian professional football club based in the city of Sibiu, Sibiu County, currently playing in the Liga I.

The team was established in 2015 and introduced in the fourth league, with Hermannstadt being the equivalent of the city's name in the German language. Roș-negrii achieved successive promotions and in 2018 reached the Liga I, the highest level of the Romanian football league system. In the same year, they also played a Cupa României final, which they lost to Universitatea Craiova.

Hermannstadt's home ground is the Municipal stadium, which is under renovation and currently has a capacity of 4,500. It was previously used by several other clubs in the city.

Municipal Stadium is a multi-use stadium in Sibiu, Romania. It is used mostly for football matches and is the home ground of FC Hermannstadt. The stadium holds 5,000 people.

Since 2018, the stadium has been undergoing partial €38-million reconstruction project which will increase its capacity to 12,000.