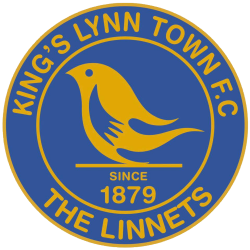 Wrexham vs Kings Lynn Town (22 May)

King's Lynn Town Football Club is a football club based in King's Lynn, Norfolk, England. They are currently members of the National League, the fifth tier of English football, and play at the Walks.

The club was established in 2010 after King's Lynn F.C. were wound up in 2009. They were admitted to the Premier Division of the United Counties League and were runners-up in their first season in the league, also reaching the semi-finals of the FA Vase, where they lost 6–2 on aggregate to Coalville Town. After finishing as runners-up again in 2011–12 the club were promoted to Division One South of the Northern Premier League. They won Division One South at the first attempt, earning promotion to the Premier Division. In 2015 the club were transferred to the Premier Division of the Southern League. In 2016–17 they won the Norfolk Senior Cup, beating Fakenham Town 2–0 in the final. The club were runners-up in the Southern League Premier Division in 2017–18, qualifying for the promotion play-offs. After beating Weymouth 3–0 in the semi-finals, they lost 2–1 to Slough Town in the final. The club were placed in the Premier Division Central for the 2018–19 season, going on to finish as runners-up and qualifying for the play-offs. After defeating Stratford Town and Alvechurch, they were promoted to the National League North following a 3–2 win against Warrrington Town in the super play-off final.

The 2019–20 season was abandoned due to the coronavirus pandemic with the club second in the league, two points behind leaders York City with two games in hand. The National League later decided the final league table would be based on points-per-game, resulting in King's Lynn being declared champions, earning promotion to the national division.

The club took over the Walks ground from King's Lynn, who had played there since being formed in 1879. Canvas screens were erected around the ground in 1892 to prevent people watching matches without paying. In 1893 a match was played against Wisbech Town under electric lights. A stand was built in 1896, although it was demolished in 1905, replaced by a 500-seat wooden grandstand built at a cost of £250. In the mid-1950s the Supporters Club installed terracing for 4,000 and 780 seats on the northern side of the pitch. In 1955 the wooden stand was sold to a company in Spalding and a new grandstand seating 1,400 with a terraced paddock holding 3,000 was built at a cost of £27,000 and opened by then FIFA President and FA Chairman Arthur Drewry on 18 August 1956.

Floodlights were installed in 1963 and used for the first time in a Culey Festival Cup match against Cambridge City on 25 September.