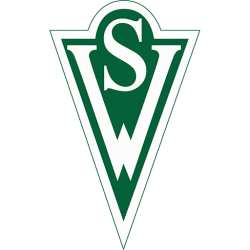 Club de Deportes Santiago Wanderers is a football club in Valparaíso, Chile, which plays in the Primera B de Chile, the second tier of the Chilean Football Federation, after being relegated from the Campeonato Nacional at the end of the 2017 Transición tournament. Their home ground, Estadio Elías Figueroa Brander, is in the north-west of the city. Wanderers have played their games there since 1931 after moving from Barrio Puerto.

Founded on the 15th of August 1892, it's the country's oldest club and the oldest football team in Latin America as well. There are four clubs older than Wanderers in Peru and Argentina, but none of those started out as football clubs and all of their football branches started after 1892. For this reason, Wanderers is known in Chile as the Decano del fútbol chileno (“The dean of Chilean football”) and forms part of Conmebol’s Club de los 100, section which congregates Latin-American teams founded over 100 years ago. In 2007, the club was declared as part of Valparaíso's intangible heritage. The club's home colours are green shirts and socks with white shorts, which are based on the colors of the Irish Football Association team.

Wanderers have a fierce rivalry with neighbors Everton and the two sides contest the Clásico Porteño (Seaport Derby), the oldest derby in Chile, which started in 1916. Wanderers are historically the working-class club whereas Everton are considered to be from the richer tourism-orientated areas.

In the club's early history, the club was a member of the local championship held in the Valparaíso Region called Liga Valparaíso, where it won seven titles. In 1926, the football associations in Chile were unified, and Valparaíso went into decline as the administrative center of the Chilean football. After this period, having joined the professional football association in 1944, the club has won three further league titles in 1958, 1968, and 2001.

Wanderers have produced important players in Chilean football history like Elías Figueroa, who is considered the best Chilean footballer of all time, as well as one of the greatest defenders of football, alongside Franz Beckenbauer, according to FIFA. Other important players that Wanderers has produced for Chile have been David Pizarro and Eugenio Mena, who were both 2015 Copa América champions, the first ever title of the nation in this contest.

Estadio Elías Figueroa Brander (Spanish pronunciation: ), formerly known as Estadio Regional Chiledeportes and Estadio Municipal de Valparaíso, is a multi-purpose stadium in Valparaíso, Chile. It is commonly known as Estadio Playa Ancha, due to the suburb where it is located. It is currently used mostly for football matches and is the home stadium of Santiago Wanderers. The stadium holds 20,575, was built in 1931 and renovated in 2014.

The highest attendance at the Elías Figueroa, then "Municipal de Valparaiso", was 23,109 for a Primera Division league match between Santiago Wanderers and Colo-Colo (0-2) on October 25, 1953.