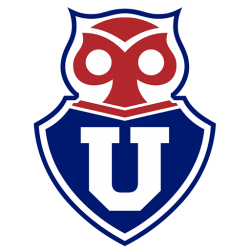 Club Universidad de Chile is a professional football club based in Santiago, Chile, that plays in the Primera División.

The club was founded on May 24, 1900. Universidad de Chile is one of the most successful and popular football clubs in Chile, having won the league title 18 times. In the last 10 years, the team has been crowned champion six times, including their undefeated run to the 2011 Copa Sudamericana title. The team has been throughout its history associated with the blue colour, also present on the logo, which was officially adopted in 1943. The club rivalries are with Colo-Colo and Universidad Católica, with whom they regularly contest the Santiago derbies known as Clásicos.

Despite not owning its stadium, the club usually plays its home games at the Estadio Nacional Julio Martínez Prádanos, in the commune of Ñuñoa in Santiago. The Estadio Nacional's modernization process, forced the team to play home games in various stadiums across Chile in 2010. Universidad de Chile made a return to the Estadio Nacional on August 2010 against Guadalajara of Mexico during the 2010 Copa Libertadores semi-finals.

Universidad de Chile was the champion of the Copa Sudamericana 2011 (the first international title of its history). In this tournament, the club had an excellent performance: wasn't defeated, won all their matches in Chile and had the top scorer of the tournament's history (Eduardo Vargas). Universidad de Chile has reached semi-finals in the Copa Libertadores four times (years 1970, 1996, 2010 and 2012).

Estadio Nacional Julio Martínez Prádanos (originally known as Estadio Nacional) is the national stadium of Chile, and is located in the Ñuñoa district of Santiago. It is the largest stadium in Chile with an official capacity of 48,665. It is part of a 62 hectare sporting complex which also features tennis courts, an aquatics center, a modern gymnasium, a velodrome, a BMX circuit, and an assistant ground/warmup athletics track.

Construction began in February 1937 and the stadium was inaugurated on December 3, 1938. The architecture was based on the Olympiastadion in Berlin, Germany. The stadium was one of the venues for the FIFA World Cup in 1962, and hosted the final where Brazil defeated Czechoslovakia 3-1. In 1948, the stadium hosted the matches of the South American Championship of Champions, the competition that inspired the creation of the UEFA Champions League and of the Copa Libertadores. The stadium was notoriously used as a prison camp and torture facility by the military regime following the Chilean coup d'état.

In 2009, a complete modernization plan was unveiled for the stadium and surrounding facilities. President Michelle Bachelet said it would become the most modern stadium in South America. The stadium will be the opening and closing ceremonies, athletics, and football venue for the 2014 South American Games and the 2023 Pan American Games.